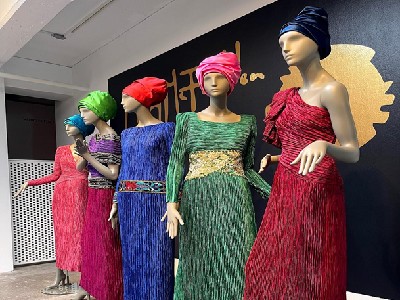 “Mary McFadden: American Fashion Designer” is on view at the Sue and Leon Genet Gallery through Oct. 15, 2021.

A new exhibition at Syracuse University’s Sue and Leon Genet Gallery at the School of Design features distinctive garments that reflect an avid study of ancient and ethnic cultures.

“Mary McFadden: American Fashion Designer” showcases the work of a “design archeologist” as she gathers inspiration from diverse cultures and ancient civilizations. From African tribes to the Egyptian pharaohs, ancient Greece and Rome to Byzantium, they all act to inform her collections. McFadden realizes these design elements through the use of hand painting, quilting, beading and embroidery. McFadden says, “I’ve done 60 collections, each based on an ancient civilization, and I went to all those places.”

Born in 1938 into a textile family, McFadden studied in Paris, earned a degree in fashion design from the Traphagen School of Design in New York City and a degree in sociology from Columbia University. She began a freelance design business in 1973 and in 1975 she patented a new process to pleat synthetic charmeuse into irregular pleats reminiscent of those created at the turn of the 19th century by Italian designer Mariano Fortuny. In 1976 she formed Mary McFadden Inc. and continued her business until closing in 2002.

Her patented fabric, called “Marii,” is created of synthetic charmeuse woven in Australia, dyed in Japan and machine pleated in New York City. Her concept was to create fabric that “falls like liquid gold on the body.”

Mary McFadden first spoke at Syracuse University as part of the Genet Lecture Series in 1992 and returned in 2010 to the School of Design to lecture, as well as to host a fashion show of her original designs.

“Mary McFadden: American Fashion Designer” was curated by fashion design professor Jeffrey Mayer and features 17 original designs by McFadden dating from the late 1970s through the 1990s. The exhibition is on view through Oct. 15, 2021, and is located in the Sue and Leon Genet Gallery on the first floor of the Nancy Cantor Warehouse in downtown Syracuse. All garments are from the Sue Ann Genet Costume Collection housed within the fashion design program in the School of Design, College of Visual and Performing Arts.

About the Sue and Leon Genet Gallery

Based in the School of Design at the Nancy Cantor Warehouse, the Sue and Leon Genet Gallery is a student-managed space hosting exhibitions from the school’s students, faculty and alumni. Programing seeks to engage the University and downtown Syracuse community with exhibitions inspired by and related to the field of design. Gallery hours are Monday through Friday from noon to 5 p.m. and by appointment.