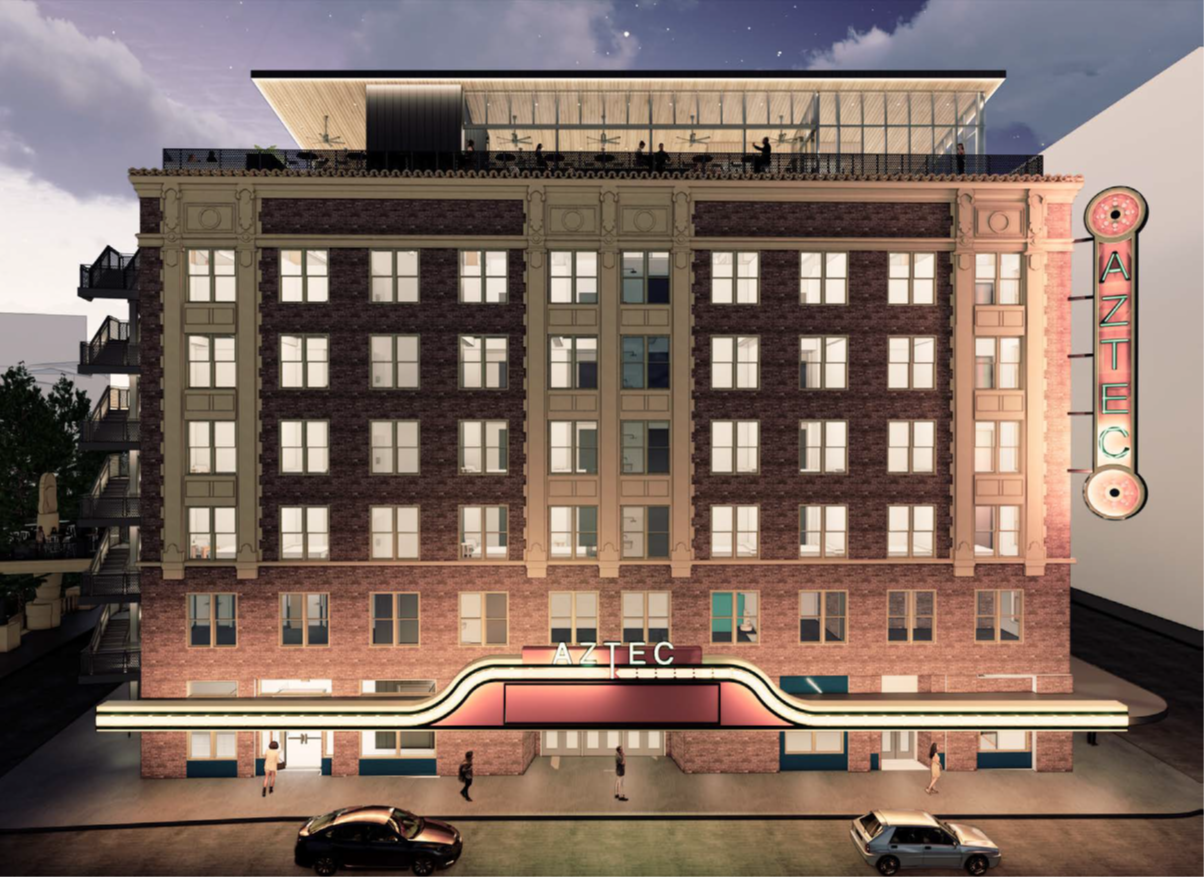 The oldest theater and entertainment venue in San Antonio is about to have an upgrade. The group that owns the downtown’s Aztec Theatre has a new vision for the upper office floors of the 96-year-old building.

Local developers and architects submitted plans to the Historic and Design Review Commission to convert the upper four floors of office space above the Aztec Theatre into a boutique hotel. The plans would also add a rooftop lounge and lobby.

The plans were submitted by Aztec Family Group LLC., the owner of the Aztec Theatre, led by local restaurateur Samuel Panchevre, along with Overland Partners and Seventh Generation Design, Inc., according to HDRC documents.

Michael Monceaux, principal on the project, and designer Oscar Yanez are working with Design Principal Tim Blomkvist. Monceaux says Panchevre approached them last year with business partner Sheem Capital, which will oversee most of the hotel portion of the project.

Monceaux says the project’s rooftop access is what will make the project viable and work well with the Aztec Theatre. The rooftop will serve as the lobby and bar area for the approximately 77-room hotel.

Monceaux say he has seen hotels that have check-in lobbies above the ground floor in bigger cities where most of the ground floor space is dedicated to retail space. The hotel will have separate entrances on St. Mary’s and Commerce streets, as well as the River Walk entrance, Yanez says.

The rooftop lounge will be made with lighter materials so not to change the foundation of the entire historic building. It will also look uniquely different from the building itself.

“The idea, from a historic standpoint, is to set this new edition from the face of the old building and not try to replicate or make anything that looks like it’s trying to copy something that’s historic,” Monceaux says.

Both stress that the hotel will not interfere with Aztec Theatre operations, especially since the four floors of the office building are essentially built around the theater.

This begs the question of any noise impacts to hotel guests. Monceaux assures that noise transmission will be “at a level that you would expect from any good hotel.” He says the group will use sound isolation measures like different batt insulation and noise canceling membranes in the walls.

Monceaux says the group hasn’t decided on a name for the hotel yet. The estimated cost is also not being disclosed at this time. They have an estimated construction start date of early fall if all approvals and permits go according to plan.

The Aztec Theatre item is expected go to the HDRC on Wednesday, March 16. MySA reached out to Panchevre for comment.