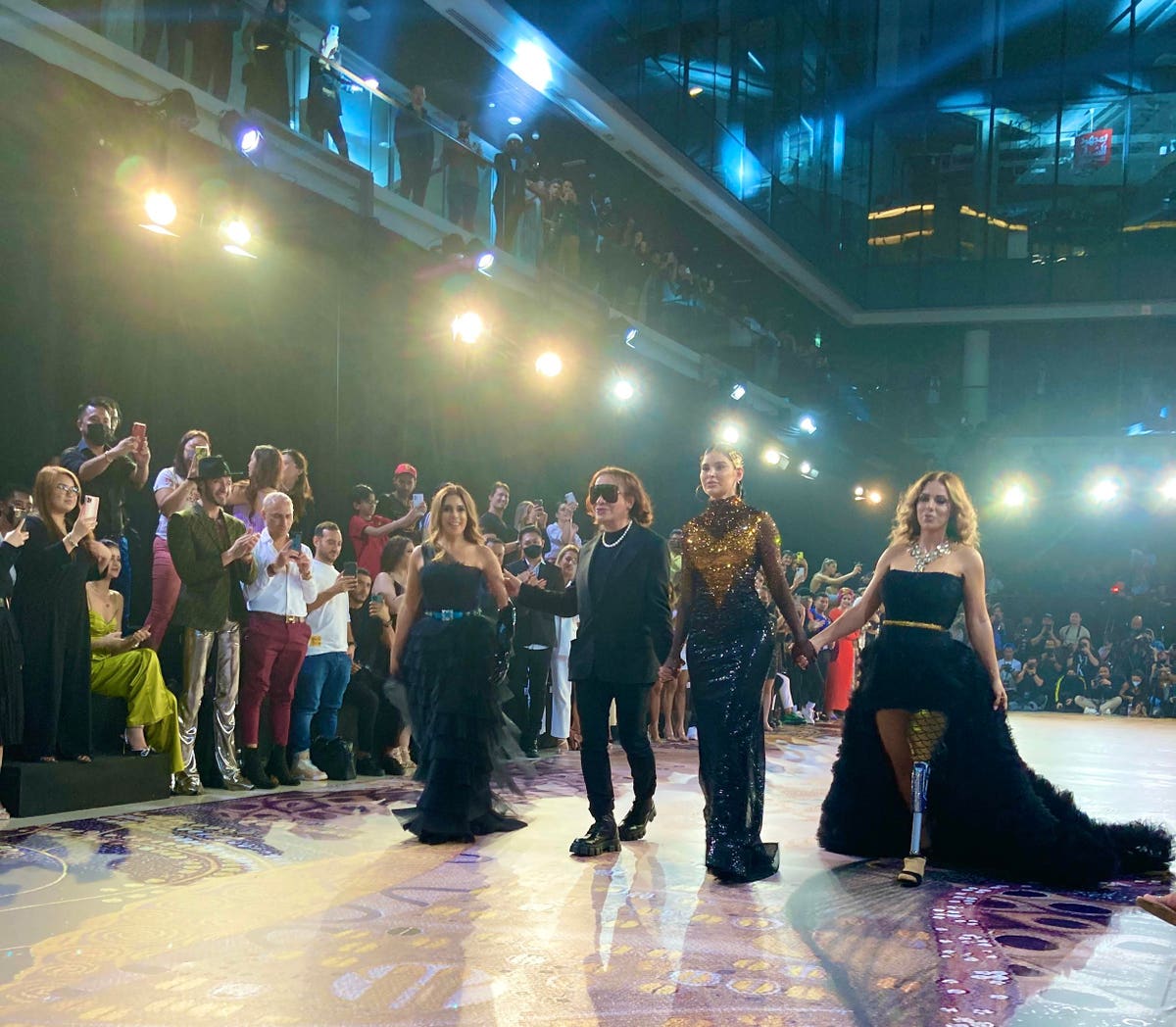 Returning to physical shows after the pandemic, which put a lot of in real life shows on pause the past two years, the Arab Fashion Council and their strategic partner d3 made a Covid safe week. Jacob Abrian, CEO of the Arab Fashion Council and Mohammed Aqra, the Chief Strategy Officer set the platform for a busy week of international and regional talent to showcase their talent, as well as small group sessions from their Council Talks to a panel discussion that was held earlier in the evening. Backstage was buzzing with make-up artists, dressers, and hair stylist Fadi Nasr, known for doing the hair for Miss Lebanon pageants, created all the looks for the models over the past four days.

Zaki was unable to be present but her show started with her talking by video from Costa Rica, inviting onlookers to enjoy her new collection. Filled with sleek eveningwear pieces of long and short looks, it’s a practical yet very stylish collection. Lots of silver and black sequins that will catch the eye of Arab women. But other pieces will suit the western market from the black evening wear gowns of spaghetti straps, off the shoulder pieces, leather looks, and jumpsuits. It’s a fun collection for women of all cultures.

Starting her fashion design career by designing for her friends and family, Zaki launched her eponymous label in 2003 in the United Arab Emirates. A dreamer, she’s self-made and also shows at Paris Fashion Week. Her strength is her ability to know what women want, highlighting in her creations areas that women may want to show off more or show off less.

Filipino designer Michael Leyva wasn’t expected to be a fashion designer. He had positioned himself to go into the tourism industry but his creativity took root. Tonight, he presented a couture collection filled with lots of beadwork and volume. Bright yellows and deep pinks, to various shades of greens, black, reds, as well as looks for men fill the collection. Off the shoulder, high slits, bell-sleeved long coats accompany gowns, and deep V neck dresses offer drama and sophistication. For the men, everyday athletic looks from shorts paired with a button down and sweater, to suits in olive green, yellow, turquois, and red give for fun looks with masculine tailoring and cuts.

Created a collection of subtle Asian hints from floral patterns and cuts on the gowns. With a color palette ranging from oranges, green, turquois, blacks, blues, pink and velvet green it’s a collection of intricate details and cuts. The designer created knee-length jumpsuits, as well as gowns with flowy trains.

While RC Caylan is a traditional yet contemporary designer, he makes sure that his creations are unique and sophisticated. His grandmother, as school uniform seamstress was his first inspiration. And today, the Michigan based designer creates gowns, bridal gowns, and men’s suits with couture detail design.

Michael Cinco, another Filipino designer but Dubai-based brought a packed-out house as he closed out Arab Fashion Week. With a line that circled the building of fashion connoisseurs queuing to get in, every seat was filled, as well as the balcony. Changing the flooring, Cinco and his team put down customized printed flooring. A total couture collection, Cinco wowed the room with his eye mesmerizing looks. A collection of detail, color, and couture craftsmanship every piece was made with quality and high standards of design and production. Gowns with flamboyant shoulders yet feather detailing at the bottom, to shimmery gowns in golds, greens, and creams filled the collection. Cinco created tailored shimmery suits for men with detailed beadwork blazers.

But, what stole the hearts of the audience was the inclusivity of the models Cinco chose. A model with a prosthetic leg walked out in a black gown, short at the front with a long train. Immediately the audience broke into applause as she made her way down the runway. A second model walked out with a prosthetic arm. And a curvy model walked the runway getting an applause, as it was Cinco’s way of saying beauty comes in all forms, shapes, sizes, and if you’re missing a part of your body you’re just as important as anyone else. For the finale, Cinco made a dramatic entrance on the runway walking to the end with models behind him.