Americans throw away too many clothes. Poorer countries are left with the waste. 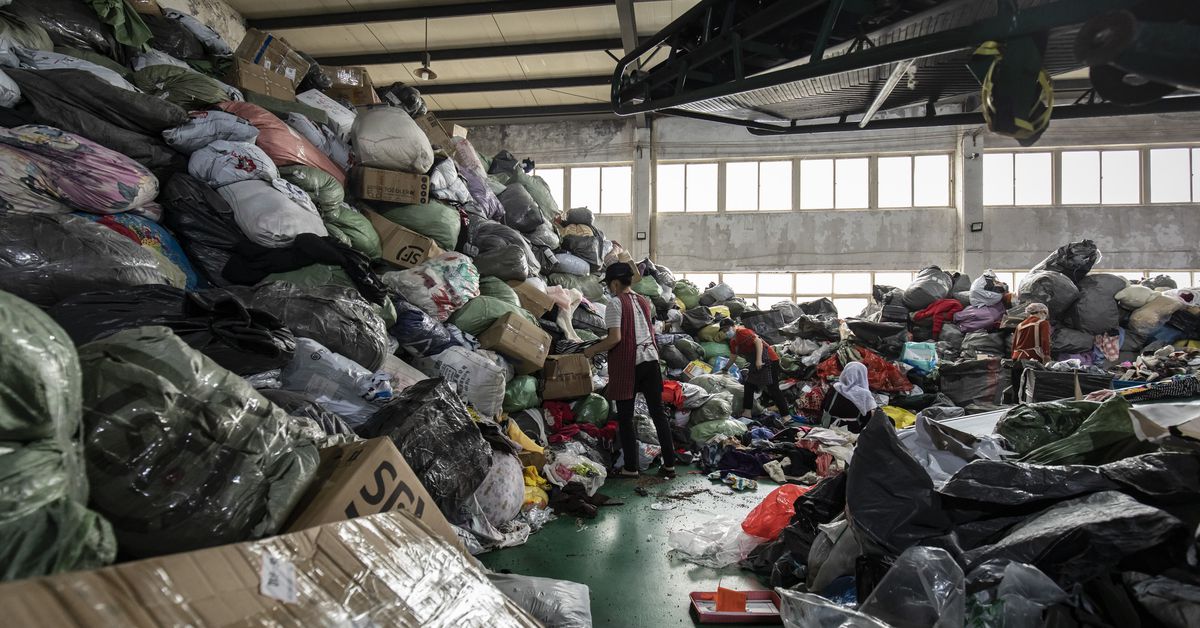 Every week, an estimated 15 million used garments from North America, Europe, and Australia arrive in Ghana’s capital city of Accra. These are the unwanted clothes that well-meaning Westerners have donated to be reused or resold, bombarding countries such as Ghana with clothing waste.

The small country of 30 million is expected to receive, disseminate, and dispose of billions of garments a year that aren’t theirs to begin with. Items in poor condition that arrive in Accra are immediately thrown into landfills, while the rest are left for resellers to hawk in hopes of turning a profit. But as the quality of clothes has declined thanks to fast fashion, so too have resellers’ ability to earn a living. Accra has “become the dumping ground for textile waste,” the city’s waste manager told ABC News in August. Local water systems have been polluted; landfills have become fuel for catastrophic fires.

Yet, no corporation or country has been keen to take responsibility for Ghana’s waste crisis. It exists seemingly out of sight and out of mind. In Consumed: The Need for Collective Change: Colonialism, Climate Change, and Consumerism, fashion journalist and activist Aja Barber urges Western fashion companies and sustainability advocates to consider the workers and people of the Global South, who produce our clothes and contend with our waste. The pace of how fashion is produced, sold, and bought in the West has a direct impact in developing nations, Barber argues in the book: “This [fast fashion] cycle doesn’t just harm everyone within the supply chain, it harms those at the end of the supply chain as well.”

Consumed isn’t just a sustainability guidebook. It’s a much-needed history lesson and warning about how forces like colonialism and capitalism bleed into our consumer society, right down to the clothing we choose to wear and keep.

“Being the perfect ethical consumer isn’t the point,” Barber writes. “Thinking about your consumption is.” I recently spoke to Barber about her book and her mission to help people regain the agency they think they’ve lost in a hyper-consumerist society. A transcript of our conversation follows, edited and condensed for length and clarity.

You draw a direct line between colonialism — or, as you’ve described, the “pillaging” of other cultures and nations — to the modern fashion system. Why did you decide to lead with this topic?

When countries in the Global North shut down because of Covid-19, we saw how harmful big fashion brands could be to overseas garment workers. Because these brands outsource their labor, they can refuse to pay for orders that were requested months ahead of time. A lot of the work done in factories is nonbinding, which means brands hold all of the power. If a retailer chooses to not pay for an order that’s worth millions of dollars, they can do that, even if workers in these factories have completed that order.

When major retailers do that it sends parts of the world that depend on this work into deeper economic strife. We saw mass layoffs and factory closures in some of these manufacturing countries. That means garment workers have to seek out other forms of employment to make a living.

The Western notion of “sustainability” has always looked very white, yet the process of garment-making largely relies on nonwhite people. It is nonwhite people working in those sweatshops and having resources taken from their land. Our fashion system hurts the countries we’ve outsourced labor to, and they are tasked with having the world’s clothing “donations” dumped into their backyard. This is a truly intersectional issue, and my hope with Consumed is to get readers to understand that there’s no such thing as a harmless purchase.

In August, you posted on Instagram about how the press and the media we consume has a role in facilitating mindless consumerism. With the growth of affiliate links and brand merch, it seems like every digital outlet (including Vox) can be implicated. How can people combat the mixed messaging they are bombarded by, not just from the press but also advertisers and social media?

Consumerism is fed to us from the minute we begin to understand how money works. We don’t question it because shopping is a part of our life, like a trusted family member. Any film that’s a cult classic geared toward young people, from Clueless to Pretty Woman to The Devil Wears Prada, has a makeover scene. Our culture pushes this notion that if you change your wardrobe, you can change your entire identity. That’s the message we internalize even as adults, so it’s no wonder we look to consumerism to cure all our problems.

In an exploitative consumer market, the answer is not buying more. It’s buying less. We can’t buy our way to an ethical world. We can choose to support businesses that are more ethical, but when the garment industry produces almost 14 times as many clothes as there are humans on this planet, we have to acknowledge what the real problem is. We need to buy less polyester and new clothes.

We need to make sure that our purchases are made to last. If not, we should leave that item on the rack. It requires people to be intentional and committed to buying less things they want. This will hopefully mean less profits for the millionaire and billionaire stakeholders of multinational fashion companies. People need to realize that it’s possible to take away some of the power from the Goliaths of the fashion industry.

Some shoppers have defended fast fashion’s affordability and claim that the sustainability movement is classist in its exclusion of lower-income people. I’m interested in the class nuances you outlined in your book, particularly as it addresses middle-class and working people and their role in our consumer society.

It’s not lower-income people keeping fast fashion brands afloat. Whenever it comes to discussing how exploitative the fashion industry is, it’s always people with economic privilege claiming that it’s classist to criticize the system. It’s so bizarre. Why are middle-to-upper-class people claiming poverty when they don’t want to investigate or think critically about what they’re partaking in?

People with money need to realize that there is no way workers are being paid fair wages for a $10 dress. I first had that realization with Forever 21. I thought it was too cheap, and the clothing felt valueless. I realized if I spent a little more money on something with better quality, I could go and put it on the resale market if it didn’t work out, if I grew tired of it, or if I outgrew it because our bodies change. As we hurtle toward climate emergency and people begin to realize how high the stakes are, I wonder how many of us will be trying to buy hundreds of dollars’ worth of clothing hauls.

Most sustainable corporate reforms are quite minimal, and they’re often a result of consumer pressure. What do you think about individual versus corporate responsibility? Is it frustrating how individual actions, when compared to major corporate decisions, can only do so much for the planet, carbon-footprint-wise?

We are quickly approaching planetary limits, and this greater problem of climate emergency will require lawmakers to do their jobs. We’re going to need stricter regulations. That’s going to be tough.

It’s important to realize that people hold power in the consumer marketplace. We have the power to stop buying from a company or to change our actions. People should be skeptical of major retailers and realize that corporations aren’t thinking about reducing scale or seasons to make more impactful, longer-lasting clothing unless they’re forced to. Corporations don’t have any incentive to change if we just shrug our shoulders and keep giving them our money. Yes, regulation needs to happen first and foremost. But there is a connection between consumer interest and the momentum we get from elected politicians.